Eval's Moonlit Journey: The artist discusses growing up with a shaman mother, Bunun's belief system, and how it influences her art.
Written by Eugenia P.G. 2016.10.19


"Can you pass your power to me?" the young girl asked.
"If you want this knowledge you need to find it in your dreams." Eval's mother said.

Now a woman, Eval shows her own power and knowledge on the Bunun's belief system thorough her paintings and most recently in her exhibition "Moon Tale".

Moon Tale is an exhibition in which the artist takes us on a journey to discover Indigenous Bunun Spirituality and conveys her interpretation of it.

Eval's spirituality was inherited from her shaman father and later nurtured by her dream healer mother. "She raised us with respect for all creations as she believed that all things have their consciousness. She also taught us that through certain rituals or prayer we were able to enter an inter-dimensional state of mind or vision for the purpose of helping and healing others."

She would say "There are big eyes up there that are watching you. So be good. You give, you take. You take, you give."   Those were  her teachings on the 'Law of Harmony'.

After the mysterious disappearance of her father in a mountain, Eval, her sisters and mother moved from her birthplace in Jade Mountain. (Yushan, the highest mountain in Taiwan)
It was during this time she was introduced to Christianity. In order to fit into dominant society, Eval mostly kept her background hidden to avoid being discriminated and labeled as 'mountain people'.

"Ancient Bunun People understood how to alter their consciousness to a subconscious state by prayers and dances for a spiritual awakening.  Those who were quick to judge this  quick damaged the true meaning of this ancient knowledge by labeling it as non-civilized and seen as naive practices. The worst part is that negative, biased and wrong information was added  into elementary school texts and higher education texts. It is until recent avalanches of protests, that these smears and defamatory texts have been removed from books."

Traditional Bunun beliefs are based on animism. Animism attributes a hanido (or soul) to plants, animals, inanimate objects and even natural phenomena. The strength of each hanido varies from object and living beings.
Humans are believed to have two hanidos, one in the right shoulder and one in the left. They are responsible for different behaviors. The left hanido tempts man with violence, greed and ire while the right hanido encourages man to be benevolent and care for others. Both hanidos are believed to have equal power and can be trained.

Moreover, the Bunun are one of the aboriginal tribes with the largest number of rituals, many of which were abandoned after the introduction of rice cultivation by the Japanese and Christianity.

"It took more than three decades to realize that going back to the essence of my initial teachings was the way back to my own skin.' It was in the quest for God, she discovered her True Essence . Eval started her journey as
an artist to get close to her spiritual Guides. 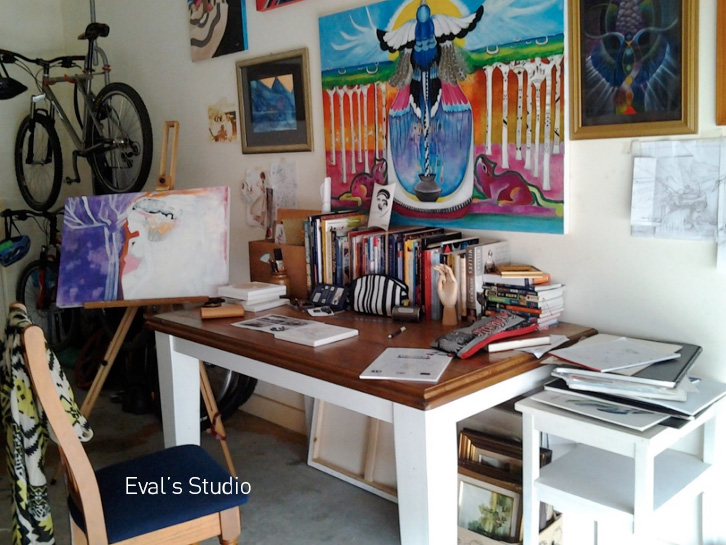 During her youth the talent and desire to create were there.
She smiles, remembering and then shares a story of the first painting she sold when she was 17, visiting Japan. " I saw a group of artists together at a restaurant, I approached them with my portfolio and one of them offered my first solo exhibition."

She describes her creative process as strong force inside of her, waiting to be unleashed.
"I don't sketch that much, mostly take colors that I am drawn to and see what happens."
It wasn't until 2012 when she lost her mother that she realized she had to answer her ongoing calling and bring Bunun's teachings to light, once again.

Her most recent work was inspired by dreams she had about her parents, telling her she needed to do something for her people. " I hadn't had an exhibit in ten years. I was inspired by  messages beyond space-time world and then it started to flow."
The moon is paramount  for the Bunun People.  Eval discusses its importance and shares traditional moon tales with
her paintings. She remembers an occasion in which her mother and sisters walked her along a moonlit path, singing a song about the moon. "I was very young but it remains in me."

Mythological elements are very present in all the legends, the artist shares one she grew up hearing.
"On a very hot day a family forgot their baby son inside the house. It was so hot that the baby burned and turned into a lizard. The parents of course blamed the sun and so, the father shot it with an arrow. The splashing blood became the stars and the weakened sun became the moon.""All the traditional Bunun ceremonial rituals are held in particular phases of the moon. For this reason the moon is sacred and central to Bunun life", Eval also mentions.

Bunun People believe that agricultural and hunting activities are determined by the lunar cycle. The full moon symbolizes fulfillment of human life and rich harvest. Other phases of the moon usually mean transition and people use it as a symbol to clear out bad situations as soon as possible. The paintings for "Moon Tale", are vibrant and nature elements seem to blossom out of the paintings, harmonizing with human forms. 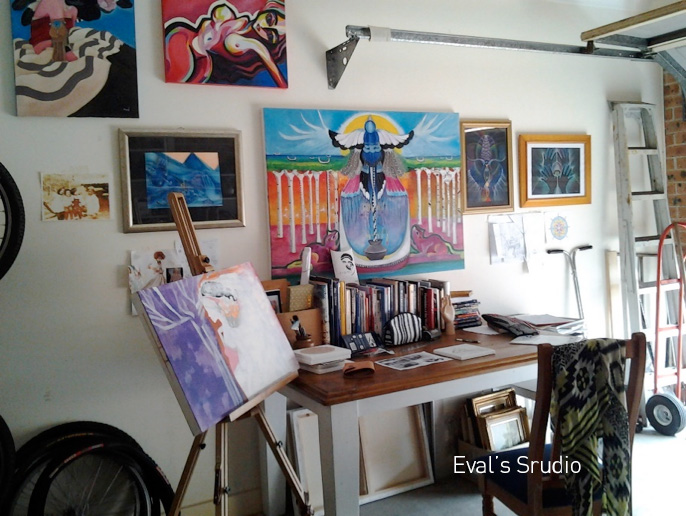 The body of work transmits a message of coexistence and our connection to nature, this is imperative for the artist.

"The Bunun Tribe in Taiwan and other Indigenous Peoples have mutual perspectives about nature. We live in nature, take from nature and will eventually go back to it when we die. We are all part of the divine cycle of Nature. Even if humans have been segregated by color, geographical distance, religion and other things, we are all standing on Gaia, our Mother Earth who gives us her silent supportive love."

To respect nature and live in harmony with the Earth is the basic teaching of the Bunun belief system. This is something that Eval plans to keep on honoring with her art in years to come.